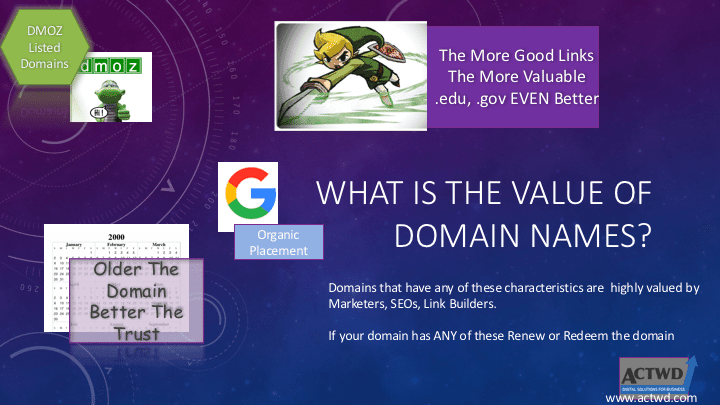 Every day when I come to work, my mailbox is flooded with people that have domain issues. Two years ago Tucows came to me and asked if we would help with all the problems domains out in the marketplace. To give a little back story on this, Tucows is a wholesale domain registration company, meaning only people like me, you know a web hosting company, can buy from them, and those resellers then service the clients. Tucows is not allowed to interfere in the relationship. But, as many have experienced, not every company is like ACTWD, committed to its customers. So we were a perfect fit for Tucows, because had been with them as a vendor 15 years, and we knew the ins and outs of domain ownership.

So as with most of my blogs these days, they are customer inspired. And so it goes with this particular blog. I received an email from a customer who didn’t want to pay redemptions fees and explained to me how his domain was worth $1.

First, let me explain about domain name renewals and how that process works. Domains are ‘purchased’ from the registry. In the early days, the government ran that registry, and you basically purchased or really leased that name from the government. They maintained the name servers which then translates the domain from letters to ultimately land at its numeric home. After all, servers work off IP addresses, not names. The basics are still the same but in 2001, domains were deregulated and allowed to be sold by multiple companies, with Tucows being one of those companies. These type companies are called Registrars. Not to be confused with the registry and its governing board ICANN. The registry is above the registrar, and they set the rules.

The rules go like this. You have to pay your domain fee annually. Prices wildly, because some use the domain to incentivize purchase, so this is where domain pricing under $10 happens. Know anything under $13 total price, the company is taking a loss on a .com/.net/.org domain. You can buy(and I really mean lease) that domain for up to 10 years. Yes,  I know some folks sell 20 and 100-year domains. It can only be renewed up to 10 years at any one time.  The rest of your money will be disbursed (if the company is still around) down the road.

If your domain expires you have 40 days to reclaim this domain for its normal renewal rate. HOWEVER, I have had it happen that domains were taken almost immediately and sold to the highest bidder before they should have been.  That has not been the normal course with Tucows, but I personally bought one from a competing registrar that was  expired for 5 days.  Bluntly, domains have value, regardless if you as the domain owner recognize that. I will explain how later in this article. You should never let your domain expire or depend on your web hosting company to just handled it. If you cannot be billed, your card on file is bad, or any combination there of, the domain will not be renewed.

At the end of the first 40 days, the domain will fall into a period called redemptions. This is where things can get expensive. The registry retakes the domain and places a hold on the domain until approximately day 61. In doing so they charge the Registrar a large fee to have the domain back. And this is where I see a lot of customer confusion when we give pricing. Depending on the extension that fee can be over $500 to reclaim the domain. There are now hundreds of domains extensions and each one has their own redemption policies attached. Canada or a .ca charges just the one-year renewal. And .i0 charges $300+ USD to redeem the domain. There really is no way around this.

At the end 90 days, that domain can (notice I said can) be released back into the general population and become available for ‘normal’ registration. Most never make it to this point. What most domain owners don’t realize is there is  an entire cottage industry out trolling for aftermarket domains, which is a fancy way of saying previously owned domains. Our Vertical Web.com was purchased for $5000 in that exact manner. So why would we spend crazy money like that on a domain when we could have just bought something else.

Why would anyone want your domain? What happens to Domains that are not Renewed on time?

There are many reasons why people want aftermarket domains.

#1 The domain Is catchy or sounds great, or could be developed into a great brand.

I personally hold domains like Mixed-up.org, that I was given to me by a client years ago. Great domain. Not sure what i want to put on it. But great domain. I have named whole companies based on domains I’ve purchased aftermarket. Vertical Web is one of them. Exclusively Commerical (sells commercial lighting), Basic-Natural sells all natural organic products. When I look at aftermarket domains, I get the best branding ideas when I walked among expired domains.

But why bother with that exercise anyway? That leads us to the next reason.

Those of you that have met me know that I often say that my eyeglasses have Google prisms in them. Meaning everything I do I look at it through Google’s eyes. There was a time that there was a feeling that Google would sandbox domains, meaning they would stop a brand new domain from ranking organically for a specified period of time. There was a time that people would spin up websites, rank them using black hat techniques until Google caught them. Buy a new domain, move the content and do it again so this was Google’s defense. But for new business owners, most can’t afford to sit in a sandbox for a year waiting for traffic to come.

So in the mid-2000s when we would onboard a new customer, we would look for an after marketing domain to give the client the best chance at quicker successes. Somewhere in my psyche I still view domains registered prior to 2004 as special. And ones that are 1990-something are rare and I scoop ’em up anytime I see them for a reasonable price.

For the purposes of building a site on the domain, always check to see if it has a Dmoz Listing, make sure that google hasn’t banned the domain, and how old is the domain. Just so we are clear there are a lot of banned domains out there. Domains with a bad link profile that can’t be salvaged Or pages that were used to spam are often why domains are banned from Google. (sticky note reminder on why domains get banned blog post).

I know a little graphic huh? Paints the right picture though. Well as many SEO folks know link aquisition is pretty hard these days. The days of reciprocal links are over. The days of setting up a directory long enough to make the links, done. Site are penguined all over the place. But out in the world are these domains with great PA or PageRank (yeah yeah, know its dead) that are just sitting out there for $19 that can be bought after market. Some have Dmoz links, although those sometimes have a higher value. Some have sought after hard to aquire links. So sometimes people go in and move that link credit to a domain that they are trying to promote. It takes alot of time to do this, but sometimes its just easier to just do this rather than write good content, and build a proper link. We don’t advocate this, but this is another use for an after market domain.

Did you know that there are people that by after marketing domains so they can build websites, get link credit to it and then link to their client websites. These are called private blog networks (PBN) and in my opinion, this is a link building technique that is just primed to be penalized when they can identify it. They host at multiple webhosts so they is no apparent affilation. Then strenghten those websites to build links to their own websites that need links. Google knows this is going on and my guess is they will eventually figure out a way to stop this practice but for now, old expired or abandoned domains are very very valuable to the web marketer.

What is the Value of a Domain?

So the customer that inspired this emailed telling us his domain is worth $1 and that was all he was willing to pay for it. But what value does a domain really have. I was just looking at a website we run that is ranking on 26,000 terms organically with an estimated traffic value of $394K a month. That’s not the norm. But there are other hidden costs. Business cards, email and brand value. Even if your a tiny guy. If your customers know you, its hard to rebrand.

Rebranding has to be thought out and shouldn’t be inspired by not paying for your domain renewal. And if a big enough company the cost for this can be extermely expensive. Things like Google My Business hates conflicting information so mixed up domain info can cost you in in SERPs too.

When I appraise domains, I look at things like age and their links. The Google rankings and if there is keyterms on it. If there are, what are they. But a domain exceeding 5-7 years old, always has an interinsic value to an SEO firm and they are out trolling for them. You may have heard stories like business.com being sold for $8M. There are two domains we have recommend purchasing that were $25K plus. We have bought some really good ones for $2500-$5000. And to me every dollar was well worth spent. So look at your domain as an investment.

One alternative should you find yourself in domain redemption is to use a service like Snapnames that trieds to claim the domains as it comes out of deletion. You may lose some of your street cred because it will issue the domain as newly registered. But it may be better than the alternatives. There is also a real chance you dont get your domain back. Bottom line  renew your domain redeem your domain. And don’t let someone else snatch it out from under you. The absolute beset advice we can offer is renew and if you have to redeem. Its the only way for you to maintain your value.